Moyhu Wagyu – About Us 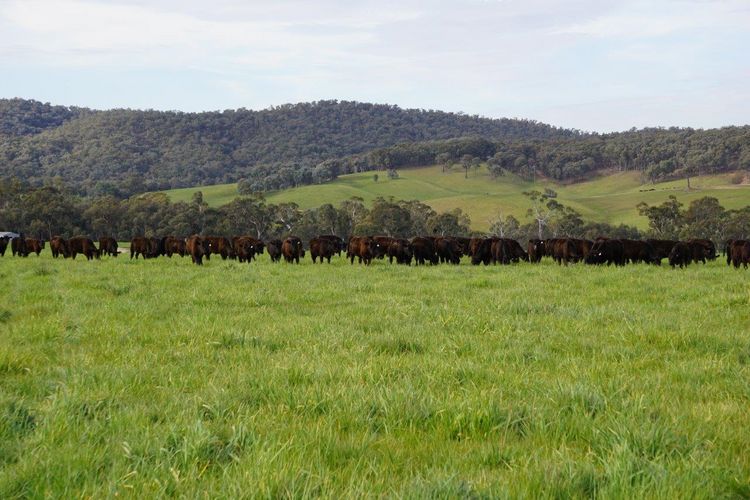 Moyhu Wagyu was established in 2000 by Leatarn Partnership after first trialing Wagyu over Angus heifers in 1997 using artificial insemination (AI). Two weeks after the AI program was completed the heifers were then joined to Angus bulls as a back up to the AI. With Wagyu being a genuine low birth weight the heifers were found to calve very easily. The Angus Wagyu X calves (F1’s) grew about the same rate as pure Angus calves born to the Angus backup bulls used after the AI program.

A lack of calving trouble from using Wagyu genetics and not having to worry about checking heifers as frequently was a huge benefit. With the easy calving and after receiving premium prices for the Wagyu X cattle sold to feedlots in Australia and also to the live export trade, we decided to AI all of our Angus females to Wagyu and also purchased Wagyu bulls to back up the AI programs.

The breeding of full blood Wagyu cattle commenced on the property in June 2000 with two heifers TWAFT0491 and TWAFT00493 (one sired by Michifuku and the other by Kikuyasu 400) that were purchased from Takeda Wagyu. It was with these cattle that an embryo transfer (ET) program was commenced. Another female PTIC was purchased earlier in 1999, TWA Sensu, sired by Terutani TF40. Another four heifers TWAFU0525, TWAFU0526, TWAFU0640 and TWAFU0643 purchased later in 2000 at the Takeda dispersal sale, were also placed into the ET program. Another Michifuku daughter Goshu Dai-Ichi who has just been PTIC again to calve in Spring 2015, was purchased in 2003, followed by two females from Westholme Wagyu, WESFY0168 and WESFY0190, one sired by Hirashigetaysu (ETJ001) and the other sired by Kitatsurukiku Doi (ETJ 007). Most of our current full blood herd result from ET progarams with these early female purchases.

Leatarn Partnership is registered with the Australian Wagyu Association as Moyhu Wagyu and all cattle are DNA tested for verification of the breeding before registration.